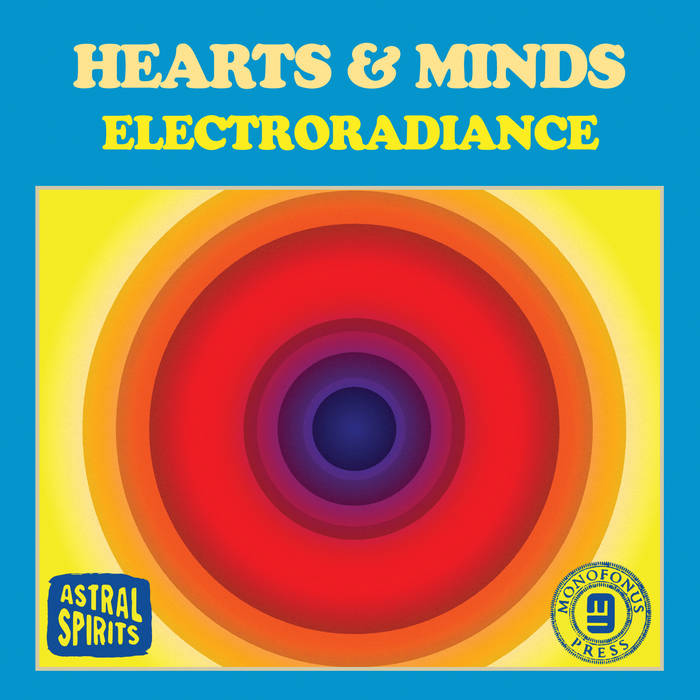 Tyman I honestly got this album because of how dope the Yellow Cassette is, but it's surprisingly experimental with it's use of drawn out synths that really emphasize the theme of "Electroradiance" Favorite track: Back and Forth.

𝕾𝖕𝖊𝖊𝖉𝖇𝖔𝖆𝖙𝖂𝖎𝖑𝖑𝖎𝖊 Very cool.
How’d they do that?

"Drawing inspiration from the astral explorations of vintage Sun Ra but relocating them in gritty Chicago” – Peter Margasak, Chicago Reader

Soon after the catchy synth-bass line that opens Electroradiance, listeners will start to suspect they’re in for something different. The synth-bass line has a herky-jerky contour that does fit a basic pattern of power-rock bands over the decades, but the bass clarinet melody that follows? Not so much. And halfway through, when the bass line becomes a vamp, and the improvisation enters a realm of altissimo squawks and thrillingly convoluted deep runs – well, we’re not in Kansas anymore, are we?

Electroradiance, the captivating new collection of grooves and freedom from Chicago trio Hearts & Minds, teems with such episodes. “Future Told” marches to a humorously ominous riff rooted in the cartoonish melodies of Raymond Scott in the 1930s. The dance-inducing beat of “Step’n” supports a stuttering melody from bass clarinet – and then some whole-tone keyboard swaths, pockmarked by synthesized percussion blips – before shifting to a fast swing beat and back again. That same dynamic comes into play on “Slippery Slope,” while a modified New Orleans street beat drives “Shreveport”. On the other hand, though, “Treeline” opens with a mournful melody and retains its lovely rubato tempo for the first portion; and the title track offers a space-agey tone poem – night-lonely and a little eerie – in which synthesized keyboard sounds and bass clarinet gargles become almost interchangeable.

Hearts & Minds is the brash and ballsy brainchild of Jason Stein and Paul Giallorenzo, who have remained friends since they met as grade-school classmates almost three decades ago. Employing an unusual, not to say bizarre, instrumentation, they make music that loops the solar system but maintains an irresistibly grounded pulse (despite the lack of a bassist). Giallorenzo’s keyboard work reaches back to the fledgling electronics of the 60s to encompass synth lines as well as asymmetrical tones and textures, which embrace Stein’s rangy command of bass clarinet techniques. Joining them for the first time on disc, drummer Chad Taylor simmers or percolates, utilizing his wealth of experience with such artists as Chicago tenor-sax legend Fred Anderson and his Chicago Underground cohorts Jeff Parker and Rob Mazurek.

Taylor’s history made him the perfect choice to replace Hearts & Minds’ original drummer, Frank Rosaly (who moved to Europe shortly after the trio’s debut recording). Working with Fred Anderson allowed him to learn from a free-jazz contemporary of Cecil Taylor, Ornette Coleman, and Pharoah Sanders, whose pioneering improvisations of the 1960s are one touchstone for Hearts & Minds. And Taylor’s collaborations with trumpeter-electronicist Rob Mazurek honed his ability to support and shape music made by electronics – the other major inspiration for Hearts & Minds, whose music reverberates with memories of Sun Ra and the jazz fusion of Miles Davis and Herbie Hancock.

As the title of the opening track indicates, this ability to go “Back And Forth” between two seemingly opposed camps distinguishes Hearts & Minds – as does the ability to find a fusion path that skirts them both. This same dialectic applies to the name of the band itself, as these musicians seek to achieve an aesthetic unification of expressionistic energy (heart) and intellectual formalism (mind) – all with a 21st-century voice that refers to but does not imitate past influences.

Jason Stein is among the mere handful of improvisers who play the bass clarinet exclusively (rather than doubling on it as a change of pace). He occasionally performs for more people in one night than most jazz musicians see in a year: his free-jazz trio Locksmith Isidore has opened arena shows for comedian Amy Schumer (his half-sister). In addition to that trio and his own quartet, he contributes to several of the leading bands on Chicago’s new-music scene, and has brought a vital voice to the freest of free-jazz jams. But he has also stated a fondness for playing actual tunes, such as those that fill the repertoire of Hearts & Minds. And while several of these songs provide a section for free improvisation, their initial frameworks provide a uniquely inviting showcase for Stein’s extraordinary expertise on the bass clarinet, which ranges from powerful post-bop lines to ear-grabbing wails in the altissimo range. Chicago writer Neil Tesser notes that his playing has “a rawboned swagger particular to Chicago jazz in all its manifestations – from the trad playing of Bud Freeman and Jimmy McPartland in the 20s, through the tenor titans of the 50s, through the adventurers who formed the AACM in the 60s, and right up to the city’s renowned modern cadre of new-music improvisers.”

Paul Giallorenzo, in addition to leading his own groups – particularly his GitGO quintets and the widely admired acoustic piano trio heard on the 2018 album Flow – has emerged as a leading virtuoso on the analog synthesizer. Giallorenzo’s work has been praised for its “inside-out” nature – his ability to push the boundaries of “conventional” jazz toward more freedom but also, on the other side, to bring a measure of structure to more avant-garde material. In addition, he is a co-founder of Elastic Arts, an important Chicago performance space and gallery, where he curates concert series, produces individual programs, and performs. Writing in the online journal Point Of Departure, John Litweiler said, “His solos and aggressive duets are gems of after-Bop, after-Bley melody,” while AllAboutJazz.org lauded music that “smudges the lines between the tradition and the avant-garde.”

Stein and Giallorenzo first met in sixth grade in Rockville Centre, a mid-sized Long Island suburb of New York City. Giallorenzo attended Northwestern University just north of Chicago; Stein, studying at University of Michigan, traveled frequently to Chicago before graduation, then moved there in the early 2000s. Each settled quickly into the city’s burgeoning jazz/new-music environment, which by then was attracting attention throughout North America and Europe. They first performed in the format that evolved into Hearts & Minds in 2003; Frank Rosaly came on as drummer in 2005, ably succeeded by Chad Taylor, who grew up in Chicago and now lives in New York. His discography includes more than a dozen albums under the Chicago Underground rubric, starting with the Chicago Underground Duo formed by him and Rob Mazurek; multiple albums recorded with Fred Anderson, guitarist Jeff Parker, and award-winning flutist and composer Nicole Mitchell; and one of the most critically respected albums of 2017, trumpeter Jamie Branch’s Fly Or Die.

Special Thanks to Nate Cross, Kim Alpert, and Constellation Chicago.

Bandcamp Daily  your guide to the world of Bandcamp

Featuring appearances from Kari Faux, Bluestaeb and and interview with NY-bred artist Wiki